When Verity falls through the floor of Ford’s Theatre and finds a smart-aleck, shape-shifting, telepathic sword named Jasper, she figures that’s as weird as her day will get. Wrong! Verity and Jasper (disguised as an old tin cup) are forced to flee Washington, D.C. in the summer of 1862, pursued by demons and assassins sent by the Honourable Merchantry, a corporation of sorcerers that secretly controls the world. It aims to possess the goofy blade and the magical stone that powers it, before the reluctant Verity can master her new powers and overthrow the Merchantry. Aided by a wacky collection of enchanted allies, including Roman Legionary rats and combat pelicans, Verity must find a way through the battling Union and Confederate armies while avoiding corrupt mages, hellish weaponry, and her own fears. She also has to cope with Jasper’s twisted sense of humor and the need to recharge his magic with favors no 12 year-old girl should do, like smoking corncob pipes. Full of sly references to Huckleberry Finn and other literary classics, BRIMSTONE AND LILY is the first book in the Legacy Stone series of tongue-in-cheek alternate-reality Civil War adventures.

Volume 2 of the wacky alternate-reality Legacy Stone series picks up where the award-winning BRIMSTONE AND LILY left off. 12 year-old tomboy Verity and her wisecracking, shape-shifting, magic sword Jasper have only a few days left to rescue her friend Eddie from the clutches of the evil Merchantry. Disguised, she must make her way through medieval Spain and ancient Greek Portugal, having to contend with musket-wielding Furies, cast-iron submarines, Muslim assassins, vicious windmills, mysterious sorcerers, the dreaded Dreamworms, and 10,000 zombie women led by Dionysus himself. Not to mention Jasper’s twisted sense of humor. Oh, and the usual poop monsters, of course. By journey’s end Verity will learn the stunning truth about her missing father and her own amazing lineage. Full of allusions to HUCK FINN, THE ODYSSEY, KING LEAR, and many other literary classics, JASPER’S FOUL TONGUE is suitable for ages 10 to adult.

Volume 3 of the Legacy Stone series sends Verity and Jasper to Napoleonic France and Elizabethan England. With only a week until time runs out for her friend Eddie, Verity must travel in a Steampunk balloon while fighting unkillable ogres, Teutonic terrorists, Papal avengers, airborne zombies, and the ever-present poop monsters. Assisting her are the ten year-old Grandmaster of the Equity, the eighty year-old Directeur of the Redeemers, a snooty basset hound, and a love-struck fire sprite named Scorch.

Paragon of the Eccentric (just published) 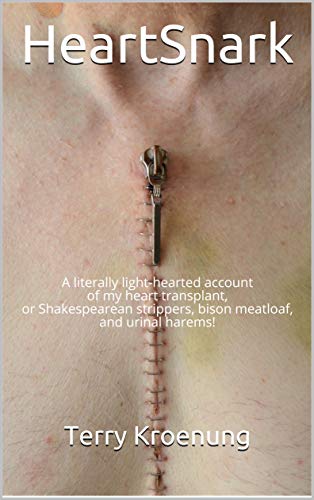 The most hilarious heart transplant memoir you’ll read this year!

In late March 2019, high school English teacher and competitive runner Terry Kroenung rode a quick 10 miles on his bike. 10 days later he had an emergency heart transplant. Really. Imagine his surprise. This memoir recounts his experiences with near-fatal pacemaker implantations, defibrillation scorch marks, 7-hour cardiac ablations, surgical staples, and the up-and-down recovery process. Along the way are 6 pregnant nurses, Canadian axe throwers, alien face-huggers, playful chest zippers, demonic urinary catheters, and the most horrifying photo of a dead heart that even the doctors had ever seen.

To keep himself — and his shell-shocked wife, family, and friends — from dwelling on the life-or-death enormity of it all, he kept a diary of everything that happened, no matter how trivial or absurd. His snarky, pun-strewn, geeky commentary on events, as well as more dubiously-termed ‘wit’ that he added after the fact (essentially playing Mystery Science Theatre with himself), make up the book that you’re somehow still reading about.

Proceeds of this book will go to benefit Donor Alliance and their life-saving work increasing the supply of transplant organs.