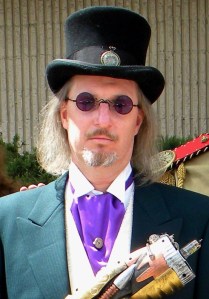 Serio-comic fantasy novels featuring talking swords and poop monsters. That’s what I write and no apologies are forthcoming.

I’m originally a playwright with a Theatre degree from Eastern Illinois University (John Malkovich went there, which is apt). MA in Fine Arts from the same place. 6 memorable years in the U.S Army, paying for that ever-so-lucrative training. 5 years on a wagon train (real covered wagons, real mules), teaching school to teenaged felons. 13,000 miles on a continuous loop from Pennsylvania to Florida, all at 4 mph.

Picked out of a catalog by my beloved spouse (really). Living in Colorado the last 23 years, no doubt with Janet wondering daily why she circled my name.

I just retired after 30 years teaching high school Literature and Creative Writing, directing a Shakespeare play every year to remind my students who’s boss (that would be Will). In fact, I occasionally portray Mr. Shakespeare at Renaissance Festivals and sundry other places (eagerly awaiting my first bar mitzvah gig). I’m also a stage combat choreographer, recognized by the Society of American Fight Directors.

Diagnosed with Asperger Syndrome in December 2006. So you can just give up on eye contact and all of those other social skills. Sorry.

Had a heart transplant in April of 2019. That was an attention-getter.

But at least I got another book out of it, about as serious as everything else I write.

I spent 6 years in the U.S. Army, moving from a PFC sports director to 1st Lieutenant of Infantry. Two of those years were in northern Virginia, near Bull Run, where I discovered Washington, D.C. and Civil War battlefields. I became a Confederate re-enactor and learned a vast amount of what I thought at the time was useless Civil War knowledge. Now it’s come in handy for creating Verity and her world in Brimstone and Lily. So when my students asked me, “Why do we have to learn this stuff anyway?” I had a ready reply besides, “Because it’s on the test.”